Paper models, photos and musings of a Paper Kosmonaut

Hi there, friends. Here I am again.
I really have done some extensive building the last few months. I still have to finish the Shuttle stack, I know, and I will. But I got a little frustrated after printing the boosters out wrong twice on very expensive paper (silly, of course, it just is a few euros at most - if not less).
I put the SRB’s aside for the time being went on and did the Eoles. After that I went and made one of my favourite aircraft models of all time, the Supermarine Spitfire. It is the well-known Anwalt model, available via Kartonmodellbau.de and via the Papermodelers forum. The model is designed as the plane Douglas Bader flew and it is a dream to build. Everything looks nice and fits just great.
While buildiing this I also have my daily jobs and a very nice girlfriend I have to take care of. So this build went slow. Slower than I wanted and perhaps even slower than I ever have been. I started this in the end of january. Feels like a long time ago. Different times.
For those of you who easily get bored by a building story, here's a photo of the final result. Click it to expand. The rest of the story is below! 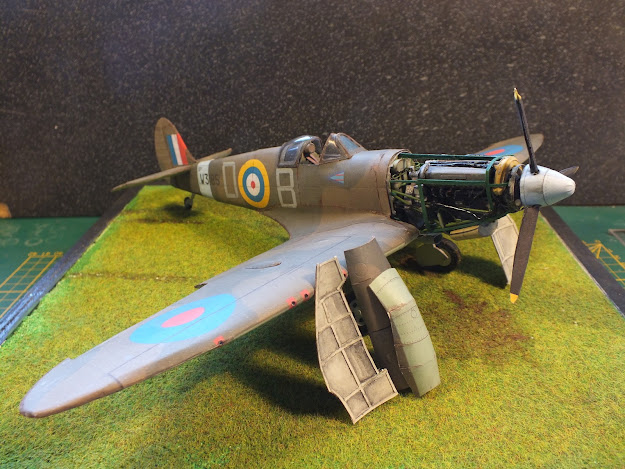 Click here to read the rest of this story!
Gepost door Paper Kosmonaut op 21:01 No comments:

Time for an inbetweenie. This one was one and a half day of fun.
I came across a paper model of Building A of Radio Kootwijk, a beautiful piece of architecture in the Netherlands. A very large Art Deco structure used for radio transmissions. Here is a picture of the finished model, the rest of the story is available when you click on the rest of the story link below. 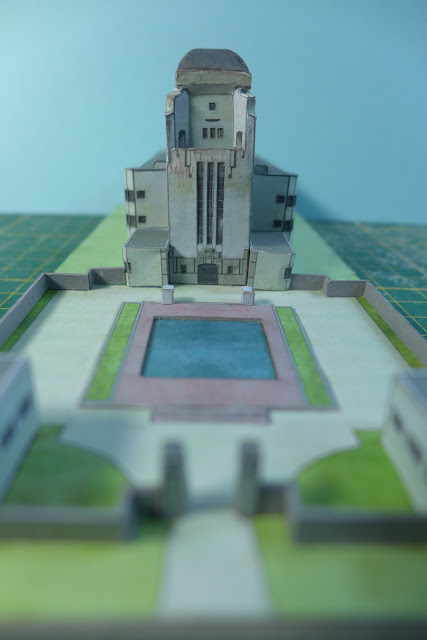 Click here to read the rest of this story!
Gepost door Paper Kosmonaut op 16:23 No comments:

What I have made in the time inbetween

As you might suspect, I am building a Spitfire at the moment and pictures hopefully will come up soon. With all stuff happening my life too is different from what it used to be and that also reflects on my paper model building things.
Anyway, I did some nice out of the box fun builds of aircraft. First up, one of my all-time favourite planes, the P-51D Mustang. This one is (of course) designed by Fabrizio Prudenziati, and was a lot of fun to build. Although the canopy doesn't really look the part because it is a little flat, the overall result is very nice and instanty recogniseable. I enlarged Zio's model to about 1/72, his original kit was a lot smaller. I realised that when I started the red tailed Tuskegee Airmen Mustang called Creamer's Dream. I redid another of his versions to 1/72 and this was the result. (But I also finished the smaller P-51 because I wouldn't dream to waste a good Zio model!) 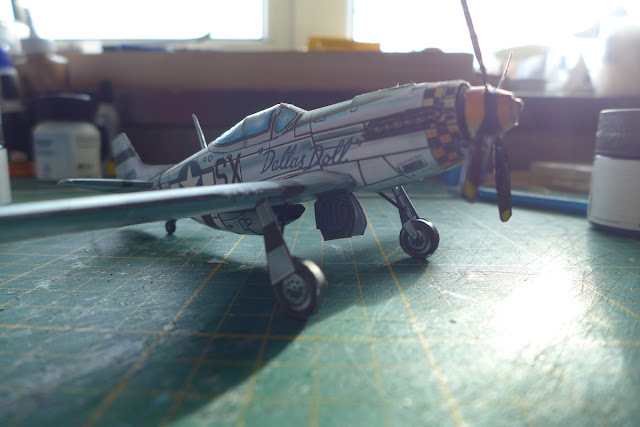 The second build is after the break. click below to see it.

Click here to read the rest of this story!
Gepost door Paper Kosmonaut op 15:48 No comments:

Yes, I realise it has been long since I posted something here. Sorry!
I might have been silent for a while but I am working on a model. Just with small steps at a time. Of course, the times we live in at the moment are weird, almost none of us have been experiencing these kinds of isolation and hermit-like situations. Hopefully it will be over soon but I don't expect things to be turned to normal for quite some time. It may be another couple of months, maybe even a year. Who knows.

I am all right, though, I have no signs of Covid-19, I am still working (albeit from home) and I am able to get out of my house to get a whiff of spring air regularly. I hope the same goes for you and your loved ones.

Last December we learned the film we were working on for almost 6 years was given the green light. We were busy planning dates for filming when Covid struck and everything ground to a halt. Still we are not disappointed, we are finetuning the script, getting done what can be done so time is usefully spent. Hopefully we can, now the restrictions in the Netherlands are lifted a little, restart out planning for shooting interviews. We'll see.

Now for the modeling stuff: I won't be posting pictures just yet, although I have a truckload of photos of the build I am working on. I will give you some hints, it has to do with WW2, an elliptical wing, large scale and someone named Bader. There. Now you know. I promise some pictures soon.

Stay safe, stay healthy and please, respect one another's space and keep your distance.
This too shall pass.

Éole from a dream

This time I took a road a little different. I was in a poetic mood, I guess. 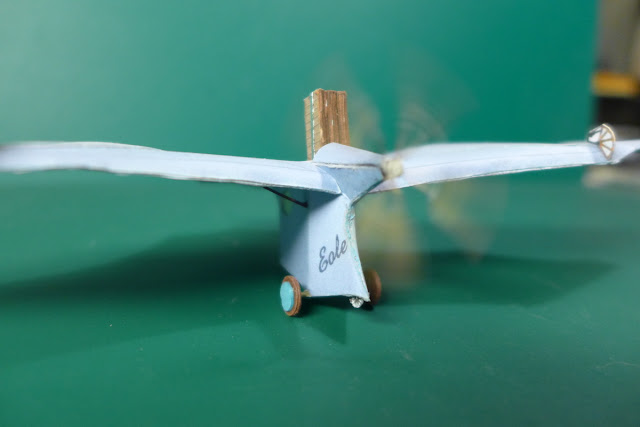 Now, some years ago I built Clément Ader's Éole, a steam-powered aircraft from 1890 which allegedly flew a few dozens of meters , just 50 centimeters from the ground. Whether if it's true or not, the aircraft itself is a beautiful thing to behold with its bat-like wings and its pretty shaped fuselage. 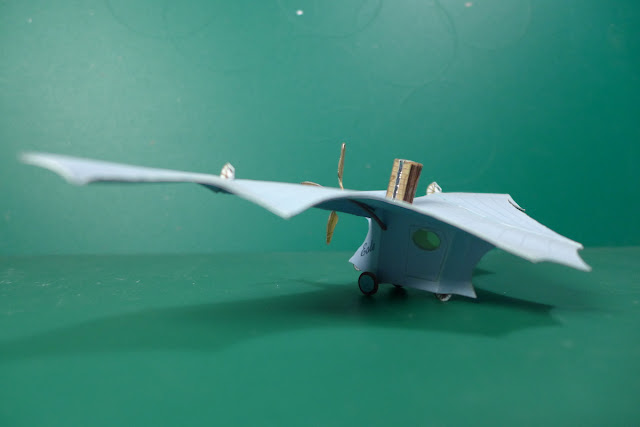 Now, my real profession, as some of you might know, is film maker. A friend of mine from that 'scene' won 'best film' in last year's local film competition with her beautifully made, dreamy animation film 'Memories wrapped in paper planes". The film has a very poetic quality and rewatching it a couple of weeks ago, it suddenly inspired me to build the Éole again, but in a more surreal and possible etheric way.

Click here to read the rest of this story!
Gepost door Paper Kosmonaut op 19:53 No comments:

For All Mankind? For All Disasters, you mean. What a train wreck of a series!

When I read Apple had made an original alternative history series about NASA and the space race with the Soviets, I was over the moon (pun intended). I really was looking forward to the first episode. And it was good. Okay, I realised they took a lot of liberties and immediately there were discussions online on whether it was realistic enough with all the initial deviations from our timeline. I didn't bother to elaborate on them, it is after all a work of fiction, just starting out at a point in real time.
I was prepared to put all of those incorrect things aside to just enjoy a different point of view, with some ficticious names and storylines. The first five episodes were very good. They focused on the somewhat clumsy efforts NASA took to get something done, some personal drama here and there, but they followed that history line. That was the base of the series. Good. It had good characters, the set dressing was meticulous and superb in its attention for contemporary details.

The last 4 episodes changed my opinion. After making a couple of well-placed jumps in time, they got stuck in 1974, with an absurd amount of huge disastrous events piling up on one another. So many, that it has not even degraded to a regular SF drama but to just plain unrealistic, in spite of all the detail and realism in all the props and sets.

Click here to read the rest of this story!
Gepost door Paper Kosmonaut op 12:55 No comments:

Finally, I have finished the N-1. Three years after more or less abandoning the project I picked it up a couple of weeks back and sdtarted working on a bnew fairing. I first wanted to see the rocket finished as such, with just the fairing on. On the way there, I decided, I would sit and ponder over what to do with the still very beautifully made (yeah, I am still really proud of it) LOK moon train. Anyway, for now, here's the finished N1!

Some stats: 108 cm length and about 23 cm at its widest. The fairing is empty of course, filled with rings and glue and all that. The LOK stack is laying on a shelf, awaiting the solution to how to do the transparent fairing I STILL want to make. I think I have an idea, I'll keep you posted. I want to get this one next to the Saturn V in the National Space Museum in Lelystad, because I think what they have in their rocket showcase now is horribly undetailed and totally out of scale with the Saturn. This might provide some necessary nuance.

Hello people. Here I am again.

There was a lot of other stuff going on which kept me from posting and building regularly. But I did keep on building.
First, the Shuttle stack is momentarily on the back burner, I found out that the SRB's were too large, and I needed to address that issue first before continuing. I have to resize all components and I also want to detail a little more. But I will resume. I don't like unfinished projects. This is what I was working on the last few weeks. 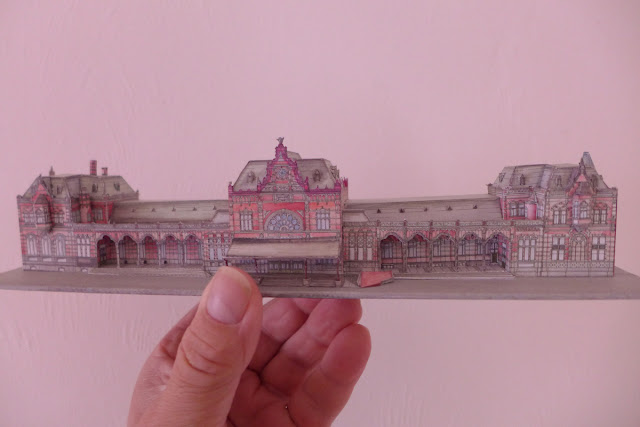 A couple of weeks back, the train station (called “Hoofdstation”) in my city was elected most beautiful station in the Netherlands. And of course that is true.

(If only that cursed atrocity of a “stadsbalkon”, which lies in front of the building, could be demolished and be replaced with something that shows a little more respect to the old neo-gothic building.)

To celebrate the election of the Hoofdstation, the Groninger Archives temporarily re-issued the big paper model of the station building of which they had a copy in their collection. They digitally scanned it and put it online in the original scale. It is a nice, hand-drawn, but rather tough model of the building. The build report follows below.
Click here to read the rest of this story!
Gepost door Paper Kosmonaut op 16:37 No comments:

Hi friends, visitors.
I still am here, I still am doing model stuff and all that.
It's just that lately I cannot find the proper inspiration to really get some progress on stuff. There's a lot to be finished, there's some stuff I want to make and there's stuff I have to do in real life outside the hobby room.

At the moment, the stuff outside the paper works is demanding too much of my attention. I will be back but for now, have a little patience.
--PK

Email ThisBlogThis!Share to TwitterShare to FacebookShare to Pinterest
Tags: I have a life outside paper modeling, My real job gets in the way sometimes, Other things than paper

It is time for an inbetweenie. The External tank is fiished, pictures will follow soon, and before I will try my luck on the Solid Rocket Boosters I wanted to do a quick inbetweenie. So there it is.
The Hütter Hü-136 was a proposed German WW2 experimental dive bomber designed right before the war. It lost the competition to other planes so it was never built. But suppose it was. It would have been a nice weirdo for air races after the war. Make up your own what-if story here. Here's a photo of the result, if you read the rest of the story you'll see the rest. 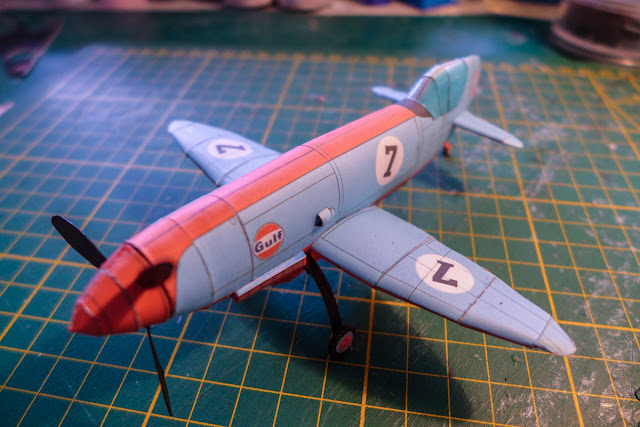 Click here to read the rest of this story!
Gepost door Paper Kosmonaut op 11:59 No comments:

I really like to hear from you all!
If you want to comment, please do. I'd appreciate that.

You can email PK at paperkosmonaut [at] gmail [dot] com.

Forums PK can be found on

Tags (weird ones too)

These are apparently my best posts, according to you all...

whatever the blogspot suffix says...